The idea of digital onomastics is to ‘lift’ place-names and personal names out of the substantial collections in scientific institutions and the books produced such places and give them a new life on the internet for the benefit of researchers and everyman alike. 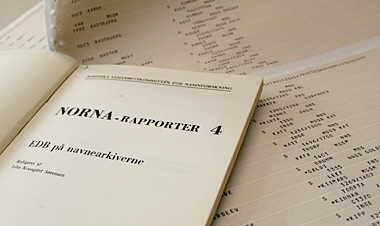 Why bother with making place-names online and searchable on fancy maps? And is it better to read about the origins of one’s first name on the computer screen? Well, not necessarily – but there is a great interest in searching place-names and personal names on the internet. Unfortunately, much of the material is of a low scientific and informative standard.

Unfortunately, most onomasts have no computer programming skills and it has thus been difficult to disseminate most of the metriculously collected name data in archives and collections to the internet in a digital form.

This website hopes to bring inspiration to fellow onomasts to start going digital and to experiment with digital formats. It really is not that difficult...

The history of onomastics

Although names have spread imagination and fascination to people for centuries, onomastics as a scientific discipline is relatively young.

The first volumes on place-names and personal names based on scientifc studies began to crop up towards the end of the 19th century, and name research as a dicipline developed in earnest during the 20th century.

The first books to explore a digital utilisation of names originate from the 1970'ies, see picture above.